Sailing World BOTY- Best Crossover Award- J/121!
(Newport, RI)- “Simply put, the J/121 is a bucket-list boat, designed to tackle adventure-style races where it’s more about the experience than winning,”commented Dave Reed from Sailing World.
He goes on to say that, “as if on cue, in the midst of our Sailing Wolrd Boat Of The Year dockside briefing with J/Boats’ Jeff Johnstone, a middle-aged gentleman appears in the companionway, out of the blue. Johnstone introduces him as an owner, from Portland, Oregon, who is trading in his J/46 for a yet-to-be-built J/121. He climbs down the companionway stairs, interrupts the judging team’s Q&A session, and then promptly cites all the races he intends to enter when he takes ownership of Hull No. 14: the Swiftsure, the Oregon Offshore, the Van Isle 360, and even the Pacific Cup from San Francisco to Hawaii. Moments earlier, Johnstone had explained this very concept: The J/121 is a bucket-list boat. This guy is Exhibit A. 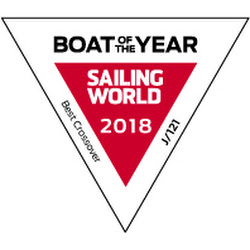 “We saw that signature events were attracting record fleets — the Fastnet Race, the Three-Bridge Fiasco in San Francisco, the Chicago-Mac, for example — all these types of short-handed, adventure-style races where it’s more about the experience than winning,” says Johnstone. “We thought that if we could eliminate half the crew on a 40-footer that’s purpose-built for point-to-point racing, but still pass the beer-can and daysail test, we’d have people interested.”
Their research led Johnstone and his brother, Alan, to a design concept built around a crew of five. As for rail meat? No need. That’s what the water ballast tanks are for.
Extra hands to get sails up and down? No need there either. There’s an impressive quiver of headsails, most on roller furlers. With the entire inventory hanging from the rig on halyard locks, and sheets and furling lines spilling into the cockpit, the boat could be easily mistaken for a Class 40 — albeit, one that actually goes upwind.”  Read on here…    Sailing photo credits- Walter Cooper
Read more here on Sailing World.com