Boats.com review of the Beneteau Sense 46: Expanding the Concept

The Beneteau Sense 46 made her southern debut at the past Strictly Sail Miami Show 2013.  The Sense 46 was a huge hit but had big competition with the Oceanis 55 US Debut.  The Sense 46 & Oceanis 55 were on the same dock stern too and both the docks and both boats were crowded throughout the show.
With the Sense 46, Beneteau remains true to the discrete and unconventional concept by closing the gap between 43 and 50 feet.

By Hauke Schmidt, YACHT magazine
Even in a sterile exhibit hall the Sense 46 comes across as inviting. Her gigantic asymmetrical cockpit with soft snap-on cushions easily handled the rush of attendees. Good thing too, because the interest in the second smallest model of this line was immense. 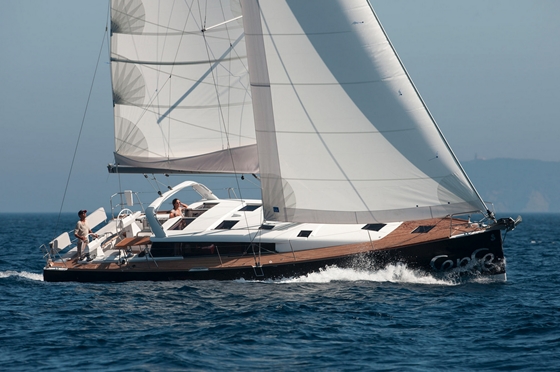 The new Beneteau Sense 46 carries on the concept of single-level living from cockpit to saloon. It’s a crowd-pleaser. Nicolas Claris photo.
When the French manufacturer introduced the first Sense about two years ago, even dealers considered it a product for a small niche of the private-owner market. With the recently presented Sense 46 there are four models already between 43 and 55 feet in length in this series, which sells better than expected. “With these boats we add new clients, especially coming out of the catamaran sector,” one dealer explained during the Hamburg boat show.