Murray Yacht Sales has the 2012 J/111 “My Sharona” for sale with an asking price of $275,000.  Several Full Sets of Race Ready sails and plenty to practice.
CLICK HERE to view the preliminary listing.  The full listing will be uploaded in the very near future. 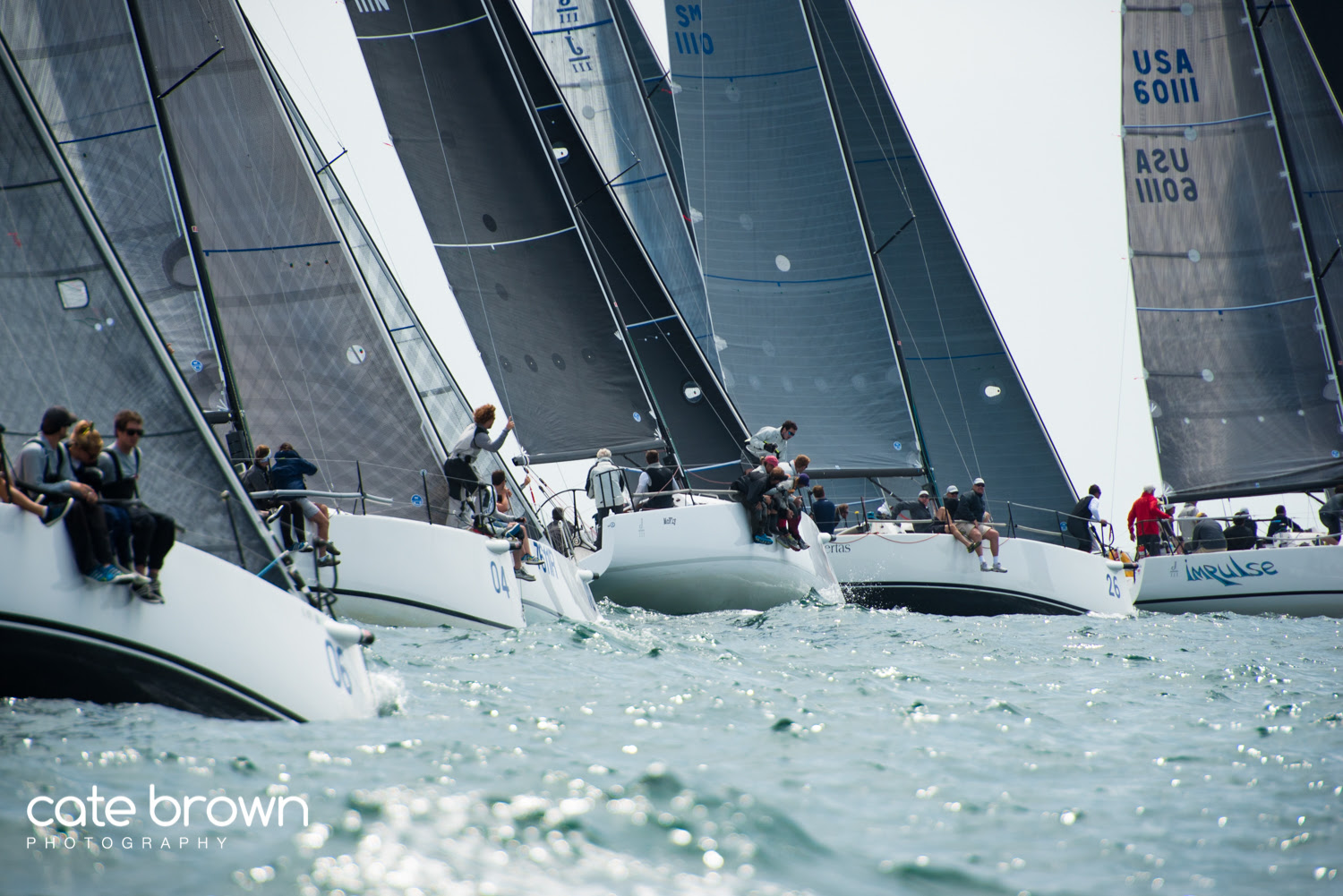 MY SHARONA Crowned J/111 World Champion!
(Newport, RI)- According to skipper George Gamble of MY SHARONA, “the most nervous day of preparation we have had was for the last day of racing of the J/111 Worlds.  The sailing conditions were so variable, we felt anything could happen.  And, with so many boats so close in a breeze that was unpredictable even for local sailors, we knew it was going to be a difficult last day.”
In the end, Gamble and his crew on MY SHARONA demonstrated yet again why they are such a good team.  Never taking any flyers and trying to stay in the hunt, they managed to take a 3rd place in the first race of the last day to seal the deal and win the 2015 J/111 World Championship off Newport.  They did not have to sail the last race.
The weather forecast for the finale on Friday was unusual as a weak frontal system was approaching Newport offering up WSW winds in the 8-12 kts range with the expectation of afternoon showers or thundershowers.  Typically, such forecasts can be way off.  With skies clearing for a period of time, the Newport seabreeze machine asserted itself for a period of time fighting the frontal gradient over the land and nearshore waters. 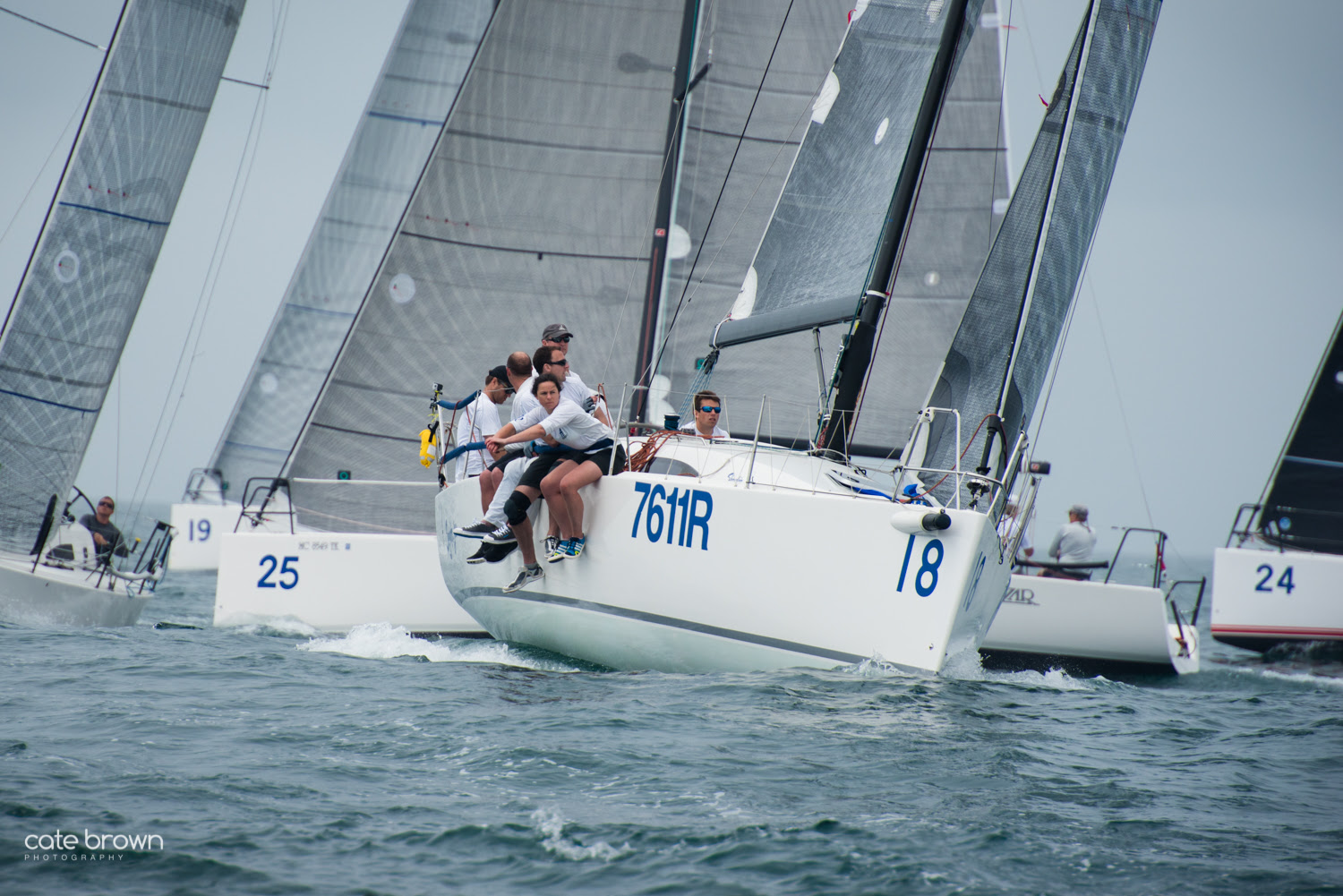 Ida Lewis YC PRO Peter Gerard setup the course east of the R4 red bell and sent the fleet off on their first race on an upwind course of 235 degrees for a 1.8nm first leg- four times around.  The starts were not without a bit of drama and after several general recalls, the final start went off with an “I” and “Z” flag.  Leading the fleet right after the start was Rob Ruhlman’s SPACEMAN SPIFF and after rounding the first weather mark first, they managed to maintain their lead to the finish.  Second was Richard Lehman’s WIND CZAR and third was Gamble’s MY SHARONA.
The final race of the series was even more complex than the first race.  The impending frontal system played games with the winds and an enormous black cloud kept diminishing and reforming over the western end of the course.  Winds varied from 7 to 12 kts and from 235 to 255 degrees.  With an outgoing ebb tide from Narragansett Bay, it was anyone’s guess how any strategy would play out.  Ultimately, it was the Brummel/ Henderson/ Mayer team on KASHMIR that rounded the windward mark first and led the fleet wire-to-wire to win race 9 in impressive fashion. Taking second was Marty Roesch’s crew on VELOCITY and third was Carl Desgagnes’ VOLTEFACE from Quebec City, Quebec.
In the end, Gamble’s MY SHARONA won with a 31 pts score followed by the KASHMIR crew from Chicago YC in second place.  Third was Bob Hesse’s LAKE EFFECT from Rochester, New York that normally races on Lake Ontario.  Fourth was Richard Lehmann’s WIND CZAR from Harbor Springs, Michigan and fifth was Rob Ruhlman’s SPACEMAN SPIFF from Cleveland, Ohio.  There’s no question there was a bit of a “theme” here, many of the top J/111 teams were all Midwest/ Great Lakes boats from J/111 Fleet #1 in Chicago and the surrounding area.
It didn’t start that way.  After the exciting first day, it was the British team JELVIS that led the way. With twenty-five boats on the line, it was anyone’s guess what would happen when you mixed the current J/111 World Champion and leading UK teams lined up against the top American, Canadian, Australian and Caribbean teams from across the world. 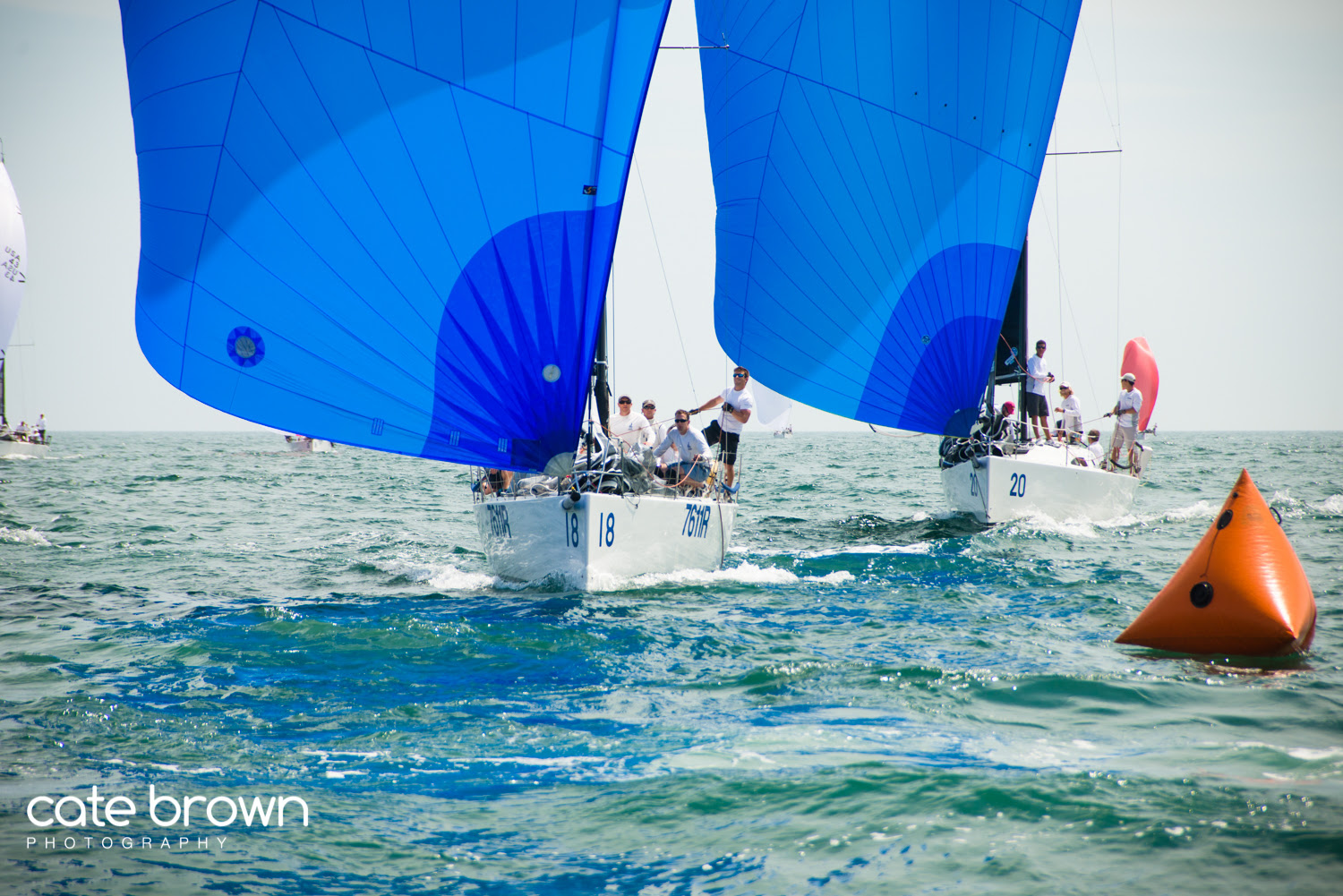 The weather forecast was not promising.  An overcast day with a dying northerly that was supposed to see a gradient/ seabreeze combination develop in the middle of the day into the 6-10 kts range with the breeze filling in at 200 degrees and veering to the 230 range.  As it turned out, it was not that far off.  After a postponement, the Ida Lewis YC PRO Peter Gerard fired off the first race in a 6-9 kts breeze in the 210 range.  By the time the second race took place at 1600 hrs, the wind had veered further right into the 220 to 240 deg range and from 9 to 12 kts TWS.
Leading after the first day was the British team of Martin Dent sailing JELVIS from Cowes, Isle of Wight with a 1-6 tally for 7 pts total.  Second was Richard Lehmann’s crew on WIND CZAR with an 8-3 scoreline for 11 pts (the current J/111 North American champion).  And, third was David & Maryellen Tortorello’s PARTNERSHIP with a 3-10 score for 13 pts.
So close was the racing that an average of a 10th was good enough to place your team in the top ten.  Even more remarkably, only ten points (well within a mid-fleet finish) separated teams from 3rd place to 15th place!  It’s quite possibly the tightest regatta that anyone has seen amongst the top teams after the first day of racing.
By the end of Day Two, a new leader emerged in the form of George Gamble’s MY SHARONA. The teams were treated to a “Newport Chamber of Commerce” day for their second day on the race track.  Starting off with the captain’s meeting at 9am Wednesday morning, the Ida Lewis YC PRO Peter Gerard announced to the fleet that it was going to be an “inside the Bay Day” and to be prepared to sail two races, a first race windward-leeward followed by the long distance race “Bay Tour”.
The morning dawned with a gorgeous sunrise, winds howling out of the north at 20-30 kts.  The forecast was for winds to ultimately diminish into the 10-18 kts range by the start at 11am from 30-40 degrees and veer to the east, in an oscillating-persistent shift to 90 degrees or so by late afternoon.  As it turned out, the forecast was not far off and it made for a spectacular day of sailing on Narragansett Bay. 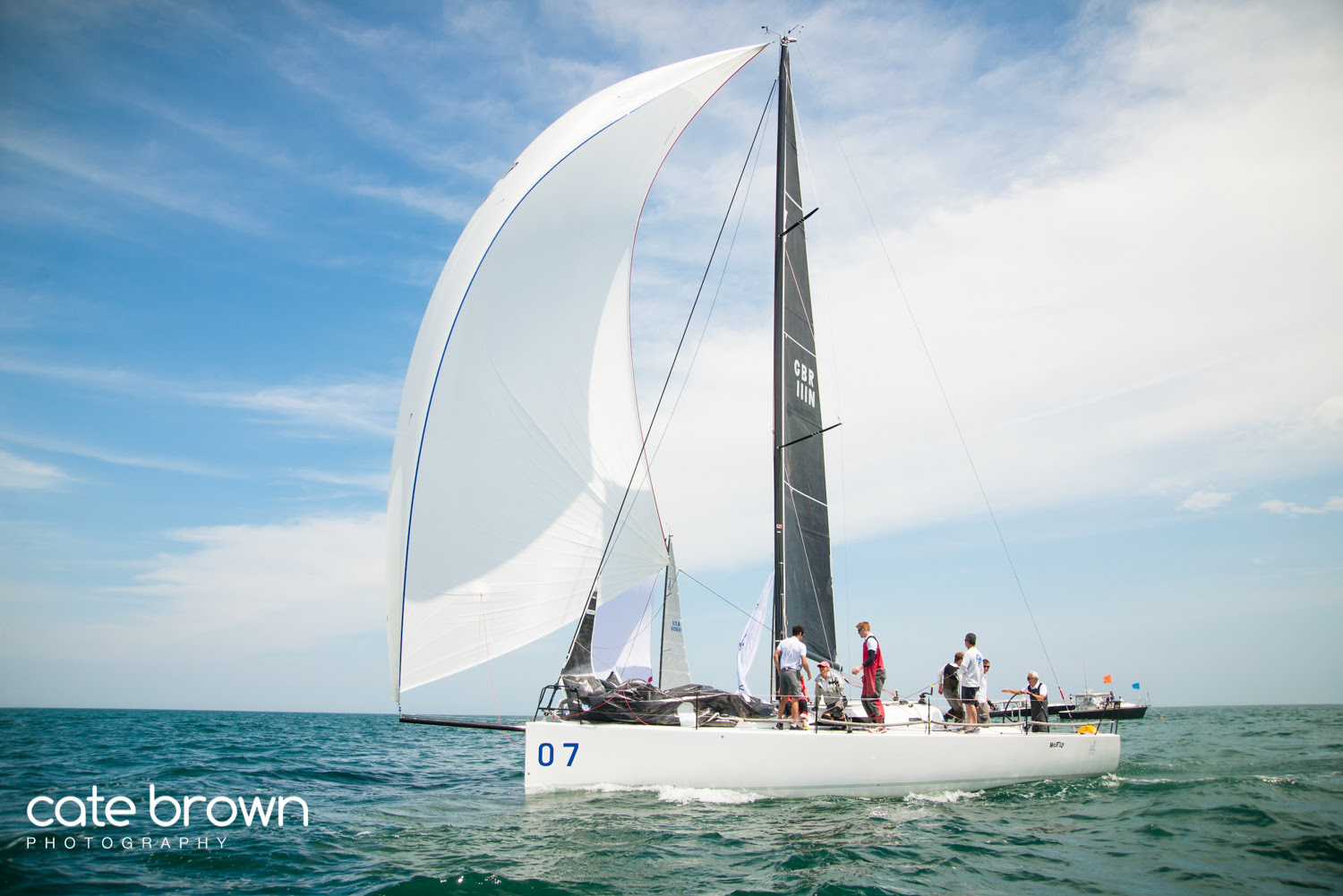 The starting area for the first race was immediately west of the northern end of Gould Island and the famous “US Navy torpedo range” buildings.  Fast off the start was Chris Jones’ WILD CHILD, nailing the starboard end start and covering the fleet going off on starboard tack. One of the first boats to flip onto port tack was Rob Ruhlman’s SPACEMAN SPIFF.  Ultimately, it was the right move as they led the fleet off to the right hand corner of the first weather leg to lead the fleet around the first mark and win the race.  Second was George Gamble’s MY SHARONA and third was Bob Hesse’s LAKE EFFECT.
The second race was the Navigator’s Long Distance Race.  The fleet was given a long 3.5nm windward leg to the green gong in the straits formed by the southern end of Prudence Island and Dyer Island on the northeastern part of the Bay.  This was followed by a reach to the red bell of the NE corner of Jamestown (Conanicut Island), then a spinnaker reach, then a fetch east across the Bay, then a long run down to the green Clingstone Rock bell and to the finish off Fort Adams.  The race was such that the first beat determined the pecking order for most of the fleet.  It also meant choosing which side of the Bay to hit a corner, go left up along Conanicut Island and play shifts into the green buoy or go right to the Portsmouth shoreline for current relief and perhaps large right hand shifts off the shore.  Off the start, the British team on WILD CHILD skippered by Chris Jones again nailed the RC committee boat start and took off to the right leading the fleet.  Another pack of boats started towards the left end of the line (including Gamble’s MY SHARONA, Ruhlman’s SPACEMAN SPIFF, Bob Hesse’s LAKE EFFECT and David & Maryellen Tortorello’s PARTNERSHIP) and played a completely different wind/current strategy to the far left hand side of the race course.  At the first windward mark, that pack remarkably led the fleet around the first mark.  First in from the right hand side grouping was Jones’ WILD CHILD.  From there on end it was essentially a parade around the marks to the finish line.
Gamble’s MY SHARONA won the last race and became the new leader of the J/111 Worlds with a 9-8-2-1 for 20 pts and the only boat with all single digit finishes.  Taking 5th in that race and lying second overall was Ruhlman’s SPACEMAN SPIFF with an 18-1-1-5 tally for 25 pts.  By virtue of their second in the last race, Hesse’s LAKE EFFECT was now third overall with a 10-12-3-2 for 27 pts.  Jumping into 4th overall was the Tortorello’s PARTNERSHIP with a 3-10-10-4 for 27 pts and in 5th was Martin Dent’s JELVIS with a 1-6-14-7 for 28 pts. 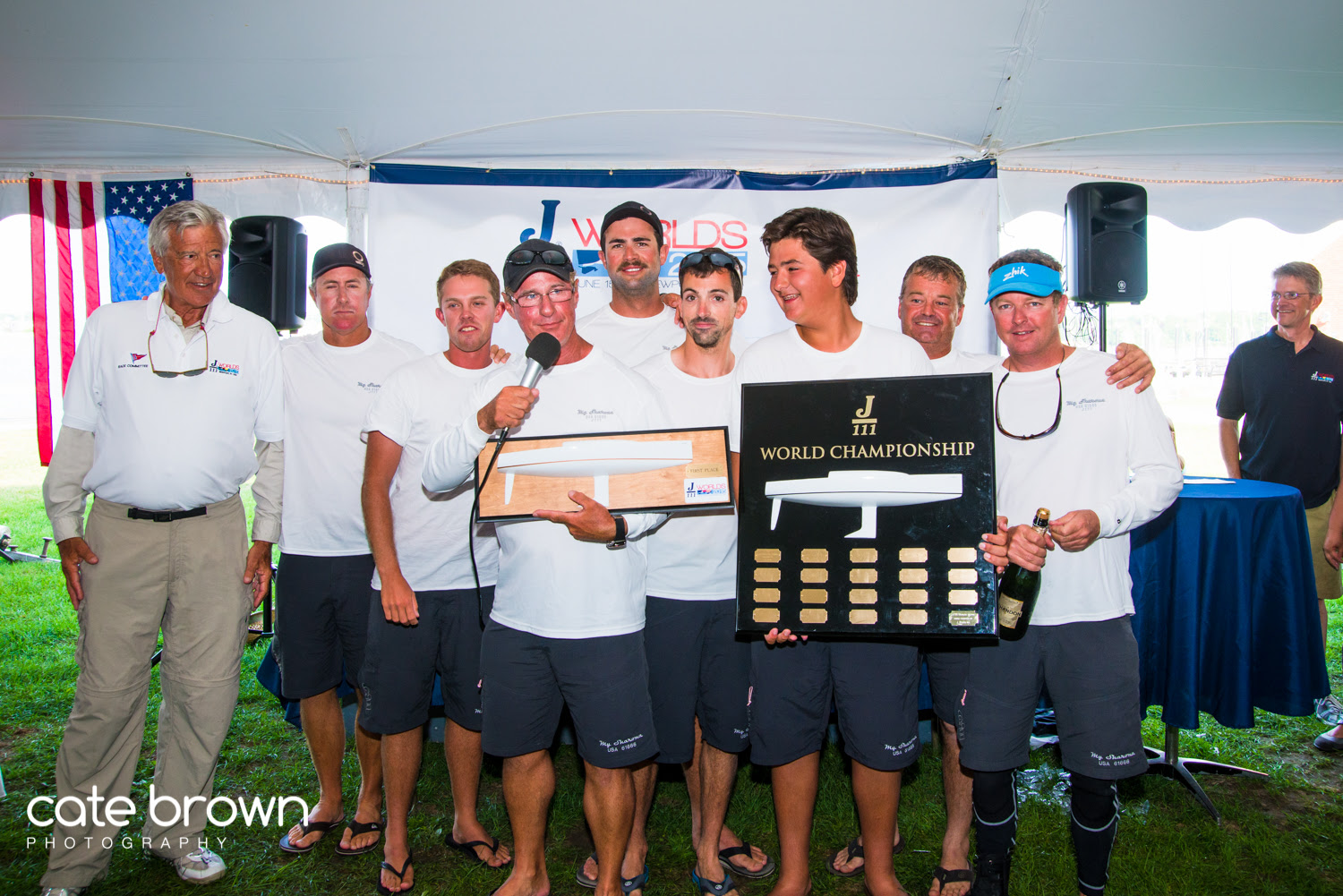 On the third day of racing, MY SHARONA extended their lead with solid, conservative sailing. The weather forecast for Thursday’s racing was benign enough- winds of 6-9 kts from the SSW all day with skies clearing in the afternoon. After about an hour postponement, the seabreeze filled in from the classic southerly direction offshore. Once the winds averaged 5 kts, Ida Lewis YC PRO Peter Gerard sent off the fleet on the first of three windward-leeward races.  By the late afternoon, the breeze had built into the 8-12 kts TWS range, making for excellent, incredibly tightly-packed racing.
Sailing the best record of the day was none other than Gamble’s MY SHARONA, extending their lead with a 4-3-1 scoreline for a total of 19 pts overall and a seemingly unassailable 15 point lead over the rest of the fleet.  Behind them, it became a war of attrition for many teams hoping to crack the top five overall.  By virtue of their 3-4-20 finishes, Bob Hesse’s LAKE EFFECT had now taken over second overall with 34 pts.  However, only one point back was the Tortorello’s PARTNERSHIP; their first race horizon job drove them into contention with a 1-7-11 score for the day.  Sitting in fourth was the trio of Brummel/ Henderson/ Mayer on KASHMIR, posting the second best scores for the day with a 5-6-3 for a total score of 39 pts.  After being in striking distance for the lead after the first two days, Ruhlman’s SPACEMAN SPIFF had a rough go of it on Rhode Island Sound with a 19-10-5 scoreline to drop into fifth overall with 40 pts total.  Only ten points separated 5th from 10th place in this close-quarters racing.
Thanks to the Ida Lewis Yacht Club, Commodore Gary Lash, Event Chair Pat Connerney, PRO Peter Gerard and their amazing team of volunteers that helped make the J/111 World Championship a resounding success.  Finally, thanks go out to all the sponsors that helped support the event, including Gold Sponsors North Sails and B&G electronics and also Industry Sponsors that included Bacardi, J/Boats, MJM Yachts, SEABlade, Quantum Sails, V Sport and RaceQs.com.  Sailing photo credits- Cate Brown.  For more J/111 Worlds sailing information
___________________________________________________________________________