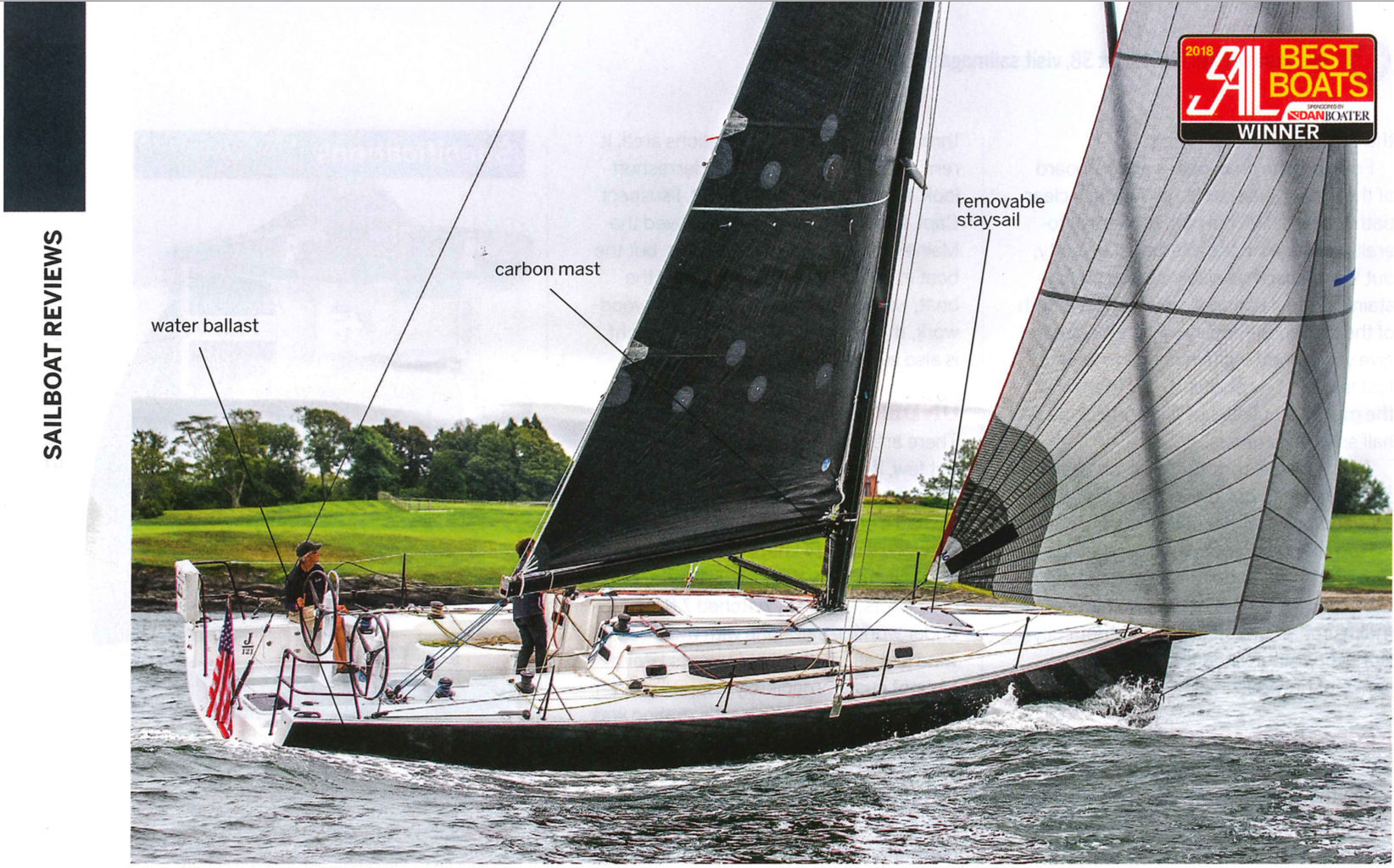 HOT New Boat For a Cool New Kind of Racing
SAIL’s 2018 Sailboat Guide for New Boats Features J/121 Offshore Speedster
(Boston, MA)- Every boat design strives for something new. But, a new kind of racing? In fact, that’s exactly what designer Alan Johnstone and the rest of the folks at J/Boats set out to do with their new J/121 one-design offshore speedster. In the process, they also just happened to create a boat that is both drop-dead gorgeous and sails like a witch—two reasons why it won SAIL magazine’s 2018 Best Boats award in the 30 to 40ft Performance category.
DESIGN & CONSTRUCTION
At the heart of the J/121’s design brief was a desire to create a shorthanded speedster that can be competitively raced with just five sailors— as opposed to the eight to 10 normally required to race a 40-footer— in the interest of making things easier logistically for today’s busy skipper.
Also, on the agenda was a boat that would work well in something called “Open Course” racing: a middle-distance format that combines the best of both around-the-buoys and offshore racing, with an eye toward getting away from the windward-leeward “sausage” courses that have come to dominate one-design sailboat racing in recent years.
With this in mind, the J/121 has been spec’d with a “five-sail” rig flying a powerful main, slightly overlapping genoa and a staysail on a continuous-line furler off the boat’s deck-stepped, double-spreader Southern Spars carbon-fiber mast.
Off the wind, sails #4 and #5 consist of a Code 0 or A-2 spinnaker tacked onto the end of a J/ Boats trademark retracting carbon sprit. The idea is to be able to raise or lower the staysail while either fully deploying or rolling up the genoa to “change gears” depending on the sailing conditions, a la a Volvo 65 or IMOCA Open 60 ocean racer.
All lines are led aft, either to the twin helms set immediately aft of a main traveler spanning the breadth of the cockpit sole—exactly as it should be aboard any serious performance boat—or to the cabin top. These include everything from the headsail sheets to the staysail halyard to a 3D genoa lead that employs a series of high-modulus in- and out-haulers and low-friction rings to place the clew of the genoa exactly where you want it. (The boat also comes with a hydraulic backstay adjuster.) The result is a fairly complex network of lines running aft—this is not a boat for newbies. But, it all makes sense and is well within the grasp of any experienced sailor.
Then there’s the water ballast: yes, water ballast in a J/Boat. Doing away with four or five crew is all well and good, but you still need righting moment if want to carry any kind of sail in a blow, so J/Boats has included a 104gal water ballast tank to either side to take the place of roughly “four big guys” worth of rail meat—rail meat that’ll never call in sick or have any kind of family conflicts.
The system is simple to use: just prime one of the tanks using an electric pump—you’ll know its full when the overflow starts gushing out via a drainage port in the transom—then transfer from one side to the other prior to each tack using a set of valves actuated by a pair of short lines set at the aft end of the starboard-side cockpit bench.
Beyond that, the J/121 is vintage J/Boats, with an infused E-glass, balsa-cored hull, a deep low-center-of gravity L-shaped bulb-keel and a powerful high-aspect spade rudder. I really like the sculpted cabin trunks and plumb ends Al has been drawing in recent years, and the look is an especially good one in this latest design.  Read the rest of the three page article here from SAIL magazine   Read the SAIL magazine 2018 BEST BOATS Review here

Murray Yacht Sales is your Gulf Coast Beneteau & J/Boats Dealer and has been serving the Gulf Coast Boating Community since 1974 with offices in Houston, New Orleans and St. Petersburg.