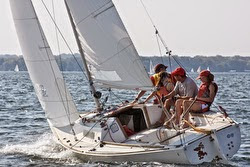 J/22 Midwinters Preview
(Ridgeland, MS)- From March 27th to 29th, the beautiful Jackson Yacht Club in Ridgeland, Mississippi will be hosting the J/22 Midwinters on the Ross Barnett Reservoir, right in the middle of the state and about 100 miles due north of New Orleans, Louisiana.  The JYC and J/22 Fleet #63 are looking forward to welcoming J/22 sailors for their first midwinter event north of Route 10!  As their invitation says, “after the races and as the sun sets, southern hospitality will amp up with the sounds of the blues and flavors of the ‘y’all’ lifestyle!”
The current entry list of forty-plus boats has attracted not just a strong southern contingent, but a highly talented range of international teams from across the USA, Canada and the Cayman Islands.  From down in the Caribbean, the rockstars of the Cayman Islands Sailing Club, Mike Farrington and gang from Georgetown, are hoping their 3rd place performance in the J/22 Worlds in South Africa will give them the competitive edge necessary to hang with the top American teams.  The same holds true to some degree for the Canadian contingent.  These refugees from the bitter cold weather of the north may already be driving south now!  They include Ron Harris’ BROOMSTICK from Hudson Yacht Club in Hudson Heights, Quebec; Darcy Fuller’s PROST from South Port Sailing Club in Windsor, Ontario; and Stephen Jones’ team from National Yacht Club in Toronto, Ontario.
Welcoming the foreign teams with open arms and fabulous southern hospitality will be at least two dozen teams from Texas, Louisiana, Florida, and Mississippi.  Some of the leading teams from this region include Chip Carpenter’s WIZARD from Southern Yacht Club in New Orleans; Benz Faget on the righteous and notorious FATS also from SYC and Metarie, LA; past J/22 World Champion Terry Flynn sailing TEJAS from League City (Houston), Texas and the Galveston Bay Cruising Association; and past J/22 Class President Galen Freeman on HOT RUDDERED BUM from Percy Priest Yacht Club in Brentwood, Tennessee.
There are surprisingly few northeastern teams participating in this year’s Midwinters.  Even then, the few teams making the 1,100 mile 16+ hour trek include some of the best teams in the J/22 Class.  Those players include one of New York’s top teams, Kevin Doyle on the famous MO’MONEY from Youngstown Yacht Club; another leading crew is Mike Marshall’s BAD NEWS from Conanicut Yacht Club in Jamestown, Rhode Island; and the sole representative from the massive J/22 fleet on the Chesapeake Bay is the current J/22 World Champion Allan Terhune on DAZZLER from Annapolis Yacht Club in Annapolis, Maryland!  For more J/22 Midwinters sailing information