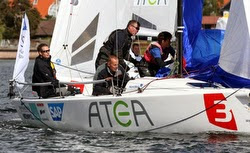 Premiere Sailing League” Launches
(Chicago, IL)- The new Premiere Sailing League promises to change the way we think about amateur sailing in the USA.  Announced at the Strictly Sail boat show in Chicago, the series kicks off this August and will be comprised of four district qualifying regattas that divide 72 sailing club teams by region (North- Chicago; South- New Orleans; East- Newport; West- San Francisco) to compete for top ranking. The best four teams from each district then compete head-to-head in the Premiere Sailing League National Championships to be held in Annapolis, Maryland during the United States Sailboat Show in October.
“The Premiere Sailing League (PSL) is the first event of its kind in the USA,” said PSL’s Director and Founder, Ben Klatzka, an avid sailor and successful businessman who recently moved from Germany to Newport, RI to pursue his dream of bringing the sailing league format to the public. “It is structured after the enormously successful sailing leagues pioneered in Germany and Denmark (www.sailing-championsleague.com), with the objective of strengthening community and camaraderie within the sport of sailing by providing an integrated platform that brings sailing clubs together to compete at both a local and national level.”
The success of the European sailing leagues has been a source of inspiration for Klatzka, who says he will someday be able to include a national sail-off in the mix. He is working with a Board of Advisors comprised of experienced sailing industry professionals for advice on how to best build the Premiere Sailing League and will be sharing details with the public over the coming weeks and months.

“To reach the broadest audience, Premiere Sailing League regattas will be held close to shore, have a stadium-style atmosphere and utilize the latest social media technologies, allowing the sailing and general public to support and encourage their teams,” said Klatzka. “With these spectator-friendly initiatives, we hope to create strong fan bases for the clubs similar to more traditional professional sports teams in the United States.”
Each of the Premiere Sailing League teams will be made up of four sailors representing yacht clubs and sailing organizations. Sailing will be conducted in fun, easy-to-sail J/70s.
“Having seen what the new J/70 sailing leagues in Europe have done to excite and promote grassroots sailing, we’re really excited to support Ben’s initiative in the USA,” said Jeff Johnstone from J/Boats.
Klatzka will soon announce a Warm up/Test Run Event at the beginning of the season for prospective competitors, team and event sponsors, and organizers for host venues.
For more information, please go to http://www.premieresailingleague.com or contact Benjamin Klatzka at +1-617-480-8775, info@premieresailingleague.com
For NEW ORLEANS information, please contact MURRAY YACHT SALES at 504-283-2507, info@murrayyachtsales.com

Click the logo to learn more about the J/70