Offshore Doubles Celebrates Rapid Growth in its First Month: 1,600 Members from 66 Countries
(London, England)- Offshore Doubles is pleased to announce at the end of its first month of operation we have 1,600 members from 66 countries with all six continents well-represented.
Our Facebook page shows a video series featuring well-known sailors like Dee Caffari (GBR) and Kenny Read (USA), younger sailors like Erica Lush (USA) and Federico Waksman (URU) and the team of Jade Cole and Barney Walker (AUS). Each weekend with the help of World Sailing, we are featuring new stories of Offshore Doubles sailors from many countries and all continents. Next up is Croatia, then China, South Africa and more. Come to the Offshore Doubles Facebook page to see these amazing people and hear their stories.
The Olympic Event of Mixed Offshore Doubles is a pinnacle event of our discipline and it was proposed and ratified as the Olympic slate by World Sailing at the Annual Conference in Sarasota in 2018 and sent to the International Olympic Committee (IOC) in 2019. Over the next month the IOC is expected to make their final decisions on the slates proposed by all sports. 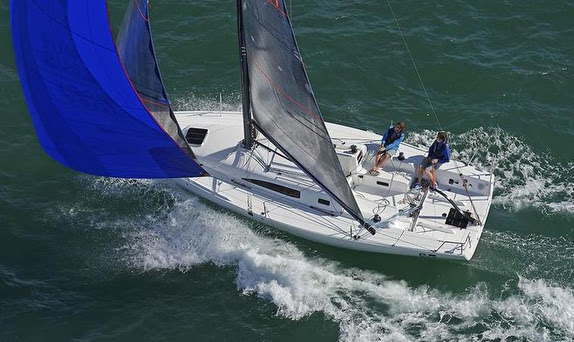 There have been some reported questions about security and cost of the Paris 2024 Olympic event. The security question has been solved by the French Navy’s assurance that they will provide security on the course. The operating costs of the event have been reviewed by the World Sailing and will be significantly lower than other sailing events because the Offshore Mixed Doubles Event is one race with a single start and finish. Other than the final short leg, all protests will be heard electronically using the 24/7 media and tracking during the event. Penalties will be assessed and taken before the last short leg to the finish and first boat across the finish line first wins.
In discussion with many of the teams, even from many smaller countries, the cost of the boat is not the big issue some claim. The boats in the event will be supplied without additional cost to competitors and the boats used for training can be any boat of appropriate size and configuration. These types of racer/cruiser boats represent 70% of sailing and hold their value well for resale. The World Sailing Equipment Committee is planning to produce a tender early in 2021 to solicit proposals for the Olympic event and there are 12 boats already proposed in a prior Request for Information.
Many countries have already started training for the event and Doubles are now a specific class in the most famous and long-established races like the Sydney Hobart, Fastnet, Round Gotlund, Bermuda and Transpac races. There are also many dedicated Doubles events and series now in Poland, Norway, Sweden, France, Australia, Hong Kong, Japan, South Africa, Italy, USA and many other countries. The events list on the homepage shows 50 events currently and is increasing daily.
Larry Rosenfeld, President of Offshore Doubles, said, “Thanks to the many people that have helped us successfully launch including Matt Allen, Stan Honey and the rest of our very experienced Board of Advisors and organizations such as SYRF, ORC, RORC, CYCA, Storm Trysail Club, all the country rating offices and federations and many suppliers like North Sails, J/Boats, Quantum, World Sailing, The Magenta Project and many others for helping to spread the word. To our members and partners, we plan to introduce new features and ways of connecting in the coming months. Thank you for your donations, your guidance so far, and your continued input.”
About Offshore Doubles
Offshore Doubles is for everyone interested in double-handing offshore from couples and friends doing weekend races to Olympic athletes and serious programs globally. We all have much to learn and teach and it’s our mission to bring this community together. There are more than 5,000 boats racing double-handed under rating rules and thousands in many strong one design fleets around the world, so we know the interest is there.
If you haven’t already done so, please come join us NOW at https://offshoredoubles.org! We need to continue to show the IOC that Doubles has broad global support. Don’t forget to invite your co-skipper and share with your friends!