J/92 – speed, sailing comfort and the magical ease of an asymmetric spinnaker
You may have to sail the J/92 to believe it! Her unique version of an asymmetric spinnaker is set from a 5.5 foot retractable, carbon-fiber J/Sprit. Jibing is a snap from the cockpit with nobody on the foredeck. Simply let out one sheet and pull in the other. The tack remains attached to the sprit at all times. Whether it’s blowing 5 knots or 25, two people can fly the J/92’s spinnaker with greater control and speed than four could have flown a conventional spinnaker.
A New Era in Sailing- Sailing World’s panel of experts and a poll of their readers, selected J/92 as 1993’s Overall “Boat of the Year” among all sailboat types including multihulls. The J/92 was the talk of Yachting Race Week, Block Island and winner of major PHRF Championships on Lake Michigan and Lake Lanier. This new concept of high performance sailboat is more than just a racer or cruiser. J/92 combines the best of both worlds without the drawbacks of either, while still retaining essential overnight capability and privacy below; the comfortable, large cockpit and simplified sailing systems of a cruiser with the response and acceleration of a finely tuned racer.
The J/92 has an attractive and modern interior with a sense of space and comfort unusual for a 30 foot sailboat with such spectacular sailing qualities. There are three criteria important for one design success which the J/92 fulfills, but which are often overlooked:
1. Is there a grace to the look of the boat that is captivating?
2. How easy and how much fun is it to sail with family and friends?
3. Will this boat expand one’s circle of sailing friends?
Rod Johnstone designed the J/92 for family participation. her great stability and highly efficient systems make it easier to sail with a few people you care for, instead of a gang of specialists you’d need sailing conventional designs. Running backstays, spinnaker pole, pole lift, foreguy, afterguys, grinders, tailers,….gorillas on the rail: they’re gone!
You hardly need a winch to tack the 100% jib or jibe the asymmetric spinnaker. It’s that easy!
Here’s a boat which is faster and more economical than IOR 3/4 tonners. It’s a boat you can enjoy sailing, racing or cruising with friends while meeting others in places you’ve never sailed before.
For J/92 Class information
Introduced: 1992     Built to: Hull #150     Last Model Year: 2003 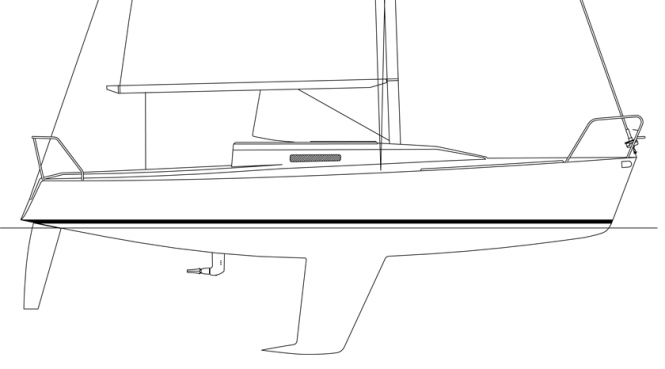