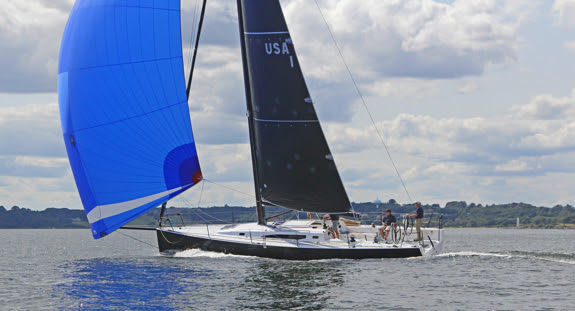 The debut of the new J/121 Offshore Speedster in the Newport and Annapolis Sailboat Shows was welcomed by enthusiastic J/sailors from across the spectrum of experience.  Long-distance offshore cruisers, one-design offshore racers, and a number of performance-oriented couples that enjoy coastal cruising without having to turn on the “iron genny”, were all quite passionate about what the J/121 had to offer to them. 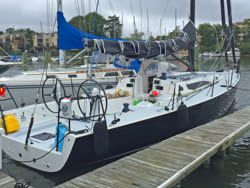 While the overall response to the 1-2-1 at the shows was fantastically positive, what we had yet to learn about the boat in all sea-trials to date was how would she perform offshore in the conditions she was designed for.  On the first delivery from Newport to Annapolis, the remnants of a hurricane delayed the departure date, and created difficult conditions for delivering a brand new boat.  As a result, it was mostly motoring under the J4 jib or motoring period.  However, after a fantastic reception at the U.S. Sailboat Show in Annapolis, it was clear that after the three days of media reviews, testing, and demos, the weather window might permit an excellent chance to determine how the 1-2-1 behaved in reaching conditions offshore.  Here is Clay Burkhalter’s report delivering the J/121 from Annapolis to Newport:
“On Saturday October 14th, Andy Williams, Arturo Pilar and I moved the new J/121, INCOGNITO, from Annapolis to Newport. I have been delivering boats for 38 years, and despite being a partner in two restaurants, I still manage to do 5 or 6 offshore trips each year. To the extent that I still do any racing, it is almost exclusively offshore… the Mini Transat 10 years ago, numerous Newport to Bermuda races and the occasional Bermuda 1-2, including the 2017 race in which I competed on a J/133. So it was with great anticipation that we’d be testing out the J/121 in the 20-25 knot southwest breeze predicted offshore between Cape May and Montauk, starting on Sunday morning. 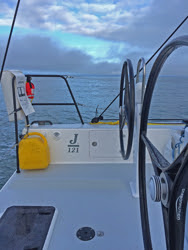 After motoring north up the Chesapeake in no wind, we passed through the C&D canal that connects the Chesapeake Bay with Delaware Bay, across the top of the state of Delaware.  We continued to motor south in Delaware Bay and rounded Cape May about 0600 on Sunday, heading northeast, still motoring in no wind.  At 1100, the breeze started to fill in and within 30 minutes, it was blowing 15 knots. By sunset, the winds would build to 25 knots with seas of four to six feet.
Typically, on deliveries, I am cautious about sail choice, often reefing early and rarely using spinnakers. The risk of damage to sails, rigging, and steering increases dramatically when pushing a boat with too much sail up. It’s one thing to have a problem on your own boat, but entirely different when you have to explain to an owner that the sails are now ready to donate to the folks who make fashion bags from sail material.
However, I knew the J/121 had yet to be sailed in the offshore conditions it was designed for, and since Al and Jeff Johnstone are my cousins, I figured they might be more understanding if we dialed the boat up a bit and see what she could do… so after a lame attempt at sailing deep with the main and the jib (Montauk was almost dead downwind, 200 miles away), we hoisted the A4 heavy weather spinnaker, and bang, we were off and running. It was an exciting moment for us as the boat instantly accelerated to double-digit speeds. 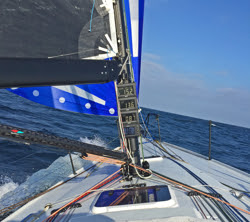 There was a leftover east-southeast swell combining with a new southwest wind wave; which made for challenging steering at the outset.  We then filled the starboard water-ballast tank to about 65%; and instantly the motion on-board smoothed out and INCOGNITO began to slide through the waves like she was on rails. Speeds became more consistent and steering was effortless.  We also soon realized, that despite the occasional roll at the bottom of a wave, combined with a puff, and perhaps a momentary lapse in steering concentration, if the boat got to 100 degrees APA (apparent wind angle) and wanted to keep going, it was easy to steer her back to our course average of 120 degrees AWA . . . no blowing the vang, easing the main sheet or releasing the spinnaker sheet. After the first hour, we sailed with those controls cleated and simply steered to the kite, it was that easy to steer. With three crew, one could rest below, while the other two maintained watch.
The ease at which the boat accelerated and sustained its speed was incredible. In 18 kts TWS (true wind speed) we were averaging 10.5 and surfing at 13 to 14 kts. In 22 kts TWS, we were doing a steady 12-13 kts and surfing for sustained periods at 14-16 kts, running up and over waves ahead.  And in 24-25 kts TWS, we were doing 13.5 to 14 kts consistently and surfing at 16 to 18.5 kts quite easily.  Needless to say, for all those who steered her in these conditions, it left everyone with a big grin on their face!
I often reach a point on a boat where I say to myself, I don’t want to go this fast. . it could be the keel and rudder vibrating excessively, the bow submarining in waves, steering on the edge of control, and so forth.  Not once did we have a panicked feeling on board the 1-2-1, and not once in seven hours did someone have to lunge for a sail control to put the brakes on an incredible ride!!  Ease-of-handling is great no matter how many crew are on-board, but it’s especially critical when you’re out there way offshore, short-handed, tired, and steering for hours-on-end, or when the autopilot is running the show. The easier the boat steers in demanding conditions, the less fatigue and also the less drain on your batteries when you’re on autopilot!! 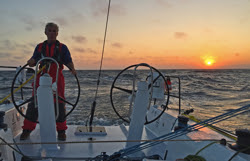 At sunset, the delivery side of my persona kicked in. knowing that the chances for problems ramp up significantly after dark, so we snuffed the spinnaker and put it below decks.
We then sailed with mainsail-only Sunday evening and Monday morning at 160 degrees AWA, heading for Block Island, averaging 9.5 knots in 25 knots of wind.
As we slid by Block Island, we considered continuing on, over the horizon. . thinking maybe we could send a note to Jeff to let him know that the son of a deceased Nigerian King would be wiring money to the J/Boats account. . he would just need to send along his bank account details.”  For more J/121 Offshore Speedster sailing information