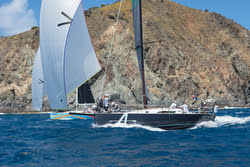 J/Boats will be hosting the first J/121 Spring Tune-Up on May 11-12 for recently launched boats in Narragansett Bay, RI.  The event will be based out of Newport Shipyard, and up to five boats are expected.   With the support of major sailmakers (including North Sails, Quantum Sails, Doyle Sails, UK Sails), a two-day coaching and training session will focus on getting teams up to speed fast, with an emphasis on tuning, sail trim, sail selection & changes, and boathandling.
The program will be especially beneficial for crews that will be participating in the 2018 Newport to Bermuda Race, hosted by the CCA (Cruising Club of America) that starts on June 15th.  The format will include on-board coaching both days and video debriefs after sailing each.  As an added benefit, each boat will have a RaceQs.com app collecting real-time GPS speed, course, heel, and implied wind direction for analysis post-sailing (broadcast LIVE here on RaceQs.com- http://raceqs.com/regattas/63052).

Friday at 1230 hrs is registration and a welcome briefing.  At 1330 hrs, the teams rendezvous off Fort Adams for boat-on-boat testing for speed, trim and tuning all afternoon.  A few boathandling maneuvers will be evaluated and coaching will be done via “open mike” on VHF so that all teams can learn from each other.  Sailing is followed by debrief and refreshments at Newport Shipyard.
On Saturday, the teams will gather at 0930 hrs for a skippers meeting, followed by a 1030 hrs warm up race. Then, an “open course” race will be started by 1200 hrs, again with on-water and on-boat coaching, followed by post-race debrief and refreshments.

Post-race analytics will be displayed by RaceQs.com and the Open Course scoring will be evaluated for the following:

As part of the discussions over the weekend will be 2018 J/121 Open Course Circuit schedule for the northeast region.  Currently, the proposed schedule follows: