Hobie Alter’s 33 foot monohull was far ahead of its time, and the reasonable costs of buying and maintaining one make it a great value.

25th March 2010.
By Paul Grimes
Owners of Hobie 33′s are likely to hear incredulous comments like, “Hobie made a monohull?” or “I didn’t know Hobie made catamarans that big.” Hobie Alter did develop a monohull sailboat in 1982, an innovative refinement of the ULDB (Ultra Light Displacement Boat) concept that started in California. It is a fantastic boat to sail, especially offwind. 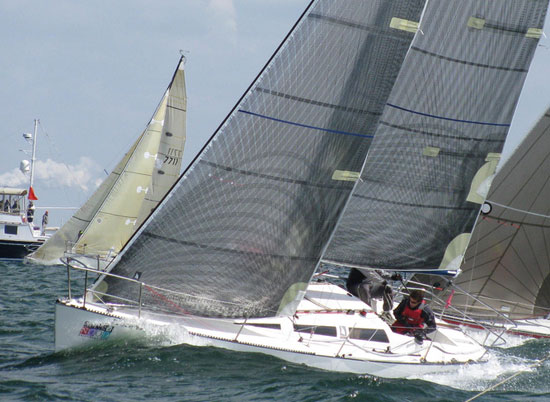 The first production ultralight displacement boats are turning 30 years old, and that means their price is finally down in the ultra-affordable range. I bought a 1986 Hobie 33 in New England for $23,000, dreaming of 20-knot surfs and front-of-the beer-can-fleet finishes, but its ancient sails and knotty foils needed replacement or repair, as well as some other standard old-boat touch-ups.
I set two budgets for this project: $5,650 for boat upgrades, like a slippery bottom, and $10,000 for sails. The boat upgrade budget is 25% of the cost of the boat and is probably considered more than the practical “going rate” for upgrades on a used boat. But the purchase cost is relatively small, and $5,000 to $6,000 isn’t much to spend on retrofitting.
The advantage of buying a less expensive boat but spending more on retrofits is that I get to spend my budget on retrofitting the boat to my high-speed tastes, which don’t include Corian counters in a new galley.
READ THE REVIEW:  http://www.sailingmagazine.net/boats/retrofits/1323-hobie-33