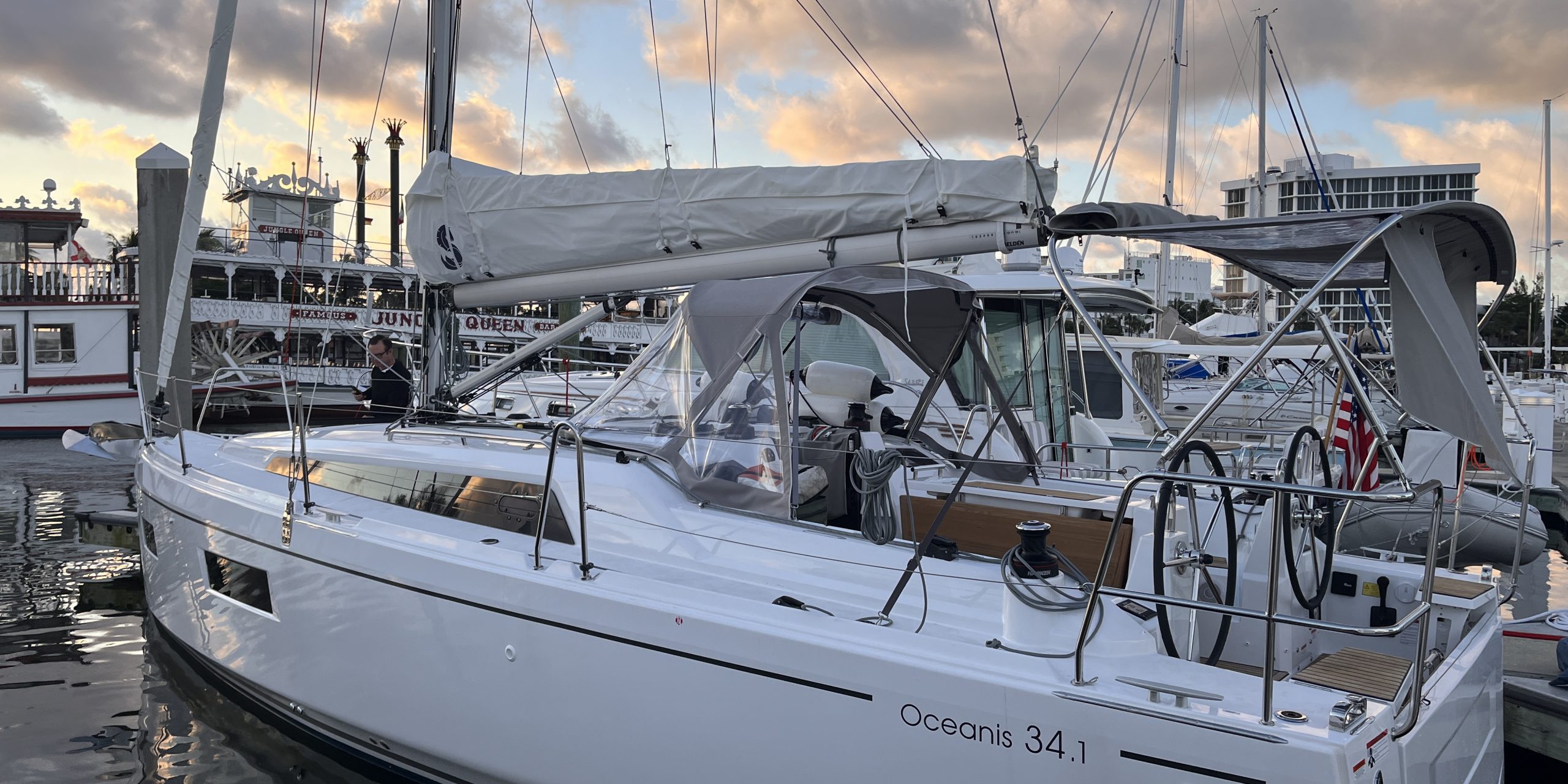 The Murray Yacht Sales Team got the chance to welcome the new Beneteau Oceanis 34.1 model to the United States on an exhilarating delivery from her commissioning in Ft. Lauderdale down to Miami for the Miami International Boat Show starting the following week.

“A more powerful sailboat than its predecessor”

Begun in 2017 with the 51-footer, the renewal of the Oceanis range continues. Bénéteau presented the Oceanis 34.1 at the Grand Pavois 2021. The yacht replaces the 35.1. By taking up the spirit of the new range and working on the equipment and manufacturing, the teams at Bénéteau claim to have gained 500 kg compared to the Oceanis 35.1. The voluminous hull designed by Marc Lombard, combined with a larger sail plan – 49.3 m² in the standard version and 71.7 m² for the First Line Performance version – should give the boat superior performance. The boat is offered with three different types of ballast: a fixed keel with a 2-meter draft and 1,580 kg or a short keel at 1.50 meters, with an additional 280 kg; a lifting keel of 1,506 kg for a high draft of 1.25 meters and a low draft of 2.55 meters.

A simple deck plan and many fittings options

In its basic version, the yacht is delivered with a single winch on the roof, allowing to manage the halyard and the sheets of the self-tacking jib, as well as the sheets of the German-rigged mainsail. If the manufacturer claims that the configuration satisfies many users, boaters wishing more ease in maneuvering can opt for a 2nd winch on the roof and 2 winches for the downwind sails or the option of a furling genoa, also available in packages called upwind or downwind. The genoa adopts a 3D adjustment system on a textile ring, instead of the traditional rail.

The cockpit offers a classic organization with a large table in the forward section and two side helm stations. The retractable seat for the helmsman, the absence of backstay and the transfer of the mainsheet point to a pantry above the roof, provide unobstructed access to the rear platform at anchor.

On the foredeck side, we can regret the self-tacking jib sheet bar on deck, not embedded, which, beyond the aesthetic aspect could prove to be trapping in the movements on the deck.

Without revolutionizing the interior layout, the Oceanis 34.1 takes advantage of the hull volume to offer a generous volume. Available in 2 or 3 cabin versions, the second version offers a separate shower and toilet.

A sign of the times, the L-shaped galley on the starboard side is equipped with a double garbage can for waste separation. On the navigation side, we will appreciate the tilting chart table.

The first boats, manufactured in Poland, are scheduled for delivery in January 2022, at a base price of 109,000 euros (excluding VAT). With this price, adjusted for the manufacturer, Bénéteau is targeting boaters in northern and western Europe, but also sailors on the continent’s inland lakes looking for these sizes of yachts.

They aimed to use the sails, even in light wind. Marc Lombard has redesigned the hull of the new ten-metre boat. The interiors are still by Nauta Design

Oceanis 34.1 belongs to the seventh generation of the successful cruising range from the French yard and, above all, it comes shortly after the 35. The 35 is a boat that provides incredible volumes and a very high level of comfort for a 9.97-metre hull that is 10.45 long overall. But that is to the detriment of performance, especially when there isn’t much wind. And so Bénéteau decided to rework everything or nearly everything. The Oceanis 34.1 is a design by Marc Lombard, who handled all of the naval architecture. What hasn’t changed is the designer of the interiors, Nauta. Despite only measuring a centimetre less than the 35, the hull is completely new. The weight has changed – it is lighter – and the beam has also been reduced. But the sail plan is not very different. The genoa has a very similar overlap, 103% on the 35 and 106% on the 34.1, but the surface is absolutely the same. The mainsail, however, has a few extra square metres if you opt for the square top instead of the furling one. And, finally, the draught is as much as two metres, while the previous model only got to 1.85.

The boat I had for the test at Port Ginesta was set up with what they call the “First Line Configuration”, which provides 29% sail surface more than the standard one. The wind was perfect: not too strong, but nor was it too weak either. It jumped between eight and eleven knots and the sea was slightly rough. So essentially the kind of conditions you would typically find on a cruise in the Mediterranean.

There are two versions available for the interiors: the standard one has two cabins, while there is an optional version with two cabins in the stern in the addition to the one in the bow.

THIS BOAT IS THE FIRST IN THE SEVENTH GENERATION OF THE OCEANIS LINE, WHICH IS THE CRUISING RANGE FROM THE FRENCH YARD.

The first feeling that you get at the helm is that you have to put a little bit of effort into getting it going, but then it moves along briskly. Even close-hauled it performs in a way that is more than satisfying. But you do have to be careful not to sail too close to the wind, otherwise, you lose speed. It is best not to go beyond 40 degrees of apparent wind. With Code 0 I went at around seven knots, with ten knots true wind speed. That is an excellent outcome. The Code 0 performs best at an angle of between 100 and 110 degrees. There are two rudder blades, so one of them is always properly submerged, even when the wind picks up and the sea isn’t particularly calm, which is what we had. The only thing about the sail plan that didn’t convince me is that with the apparent wind at 120 degrees, if you slacken the mainsail then it rests a lot on the shrouds, perhaps a bit too much.

It performs well under sail, even close-hauled.
It is important not to go beyond 40 degrees. Code 0 performs
est between 100 and 110 degrees.

But in any case, you get the feeling that it is an easy boat to manoeuvre, and which is quick to respond to changes in course, tacking and gybing. On deck, there are as many as four winches, and all of the riggings are there to hand. There are two wheels, each with forward-facing seats from which you get good visibility while underway, and a great feeling of control. Even though it is a ten-metre boat, you can see that the designers have considered safety.

MARC LOMBARD HAS DESIGNED
A COMPLETELY NEW HULL. THE AIM, WHICH HAS BEEN ACHIEVED, WAS TO PRODUCE A BOAT THAT PERFORMS WELL UNDER SAIL.

The self-inflating life raft which, especially on smaller boats, often ends up being stored in an awkward locker that is difficult to get at, in this case, is right to hand – and very close to the tilting transom. Should you need it, it is easy to get it out and push it overboard with a kick. You can sense the same degree of attention in the stainless-steel grab handles. They look solid and tough and are where they need to be – close to the seat for the helm and around the table. Anyone in the cockpit area can find one of them to hand. The standard engine is twenty horsepower, but the model that I tried had the optional version, so a 29 hp Yanmar. It produced more than enough thrust and is perfect for when you aren’t using wind to get around. Without a lot of trouble, the 34.1 got up to seven knots when powered by the engine. That was a good result for a ten-metre boat.

The life raft has been nicely placed in a compartment that is easily reached and very close to the tilting transom. It is easy to handle, with two wheels and four winches in the cockpit.

What perhaps could have been improved was the soundproofing from the engine room. There was a lot of noise, not just at top speed, but at nearly all cruising speeds. With the prop at 2200 revs, we already registered seventy decibels and, since the boat isn’t huge, an engine room without much soundproofing can be a problem. The layout of the interiors is traditional, with two cabins to the stern, and one in the bow.

A dinette with a table with liftable flaps, together with the keel-stepped mast, is located amidships. Once again, they have produced a boat with a lot of living space, given the volumes available on a ten-metre boat which will of course be limited. It feels as though six people could easily live alongside one another on a cruise, sharing cabins. And that, coming from 9.96 metres in length and 3.57 wide, is an amazing achievement typical of Nauta. There is also a standard version which has two cabins instead of three, with a large locker instead of one of the two rooms in the stern.