The Beneteau 373 offers a bright cabin with panoramic, forward facing windows.  The extra headroom adds to the open, accommodating feel to the boat. Her comfortable cockpit has a patented innovative pivoting steering wheel making it easy to walk from the helm to the companionway. Available in a two or three-cabin layout, the 373 is a classic sailing yacht with eye-catching appeal.  Built in both France & United States.

BOAT OF THE YEAR “BEST VALUE” & BENETEAU USA IS RECOGNIZED IN THE MARINE INDUSTRY CSI AWARD PROGRAM
Charleston, SC…The Beneteau 373 was awarded Boat of the Year by Cruising World Magazine for Best Value in the category of cruising boats under $200,000. The Beneteau 373 triumphed over the Catalina 387, Etap 37s, and Hunter 41.
The ceremony was held at the St. Pete Boat Show marking the culmination of a three stage judging process that began last May.
This year for the first time, Cruising World judges culled the field of possible entrants in an early nominating round. Nominees were announced in October and then were scrupulously inspected first on the dock and then on the water.
The Beneteau 373 was chosen based on several of its signature traits from her larger sisterships such as the Beneteau 423 and 393.
“This 37 footer features a stall shower, panoramic forward-facing windows that bring plenty of light into the cabin, and the same fiberglass grid system the manufacturer uses in its other models to take the sailing loads. All this for a sailaway price of $135,000 and a five year limited warranty on its structure,” said Tim Murphy, Executive Editor.
““For our purposes, I like seeing stall showers…the Beneteau 373 delivers a whole lot of bang for the buck,” commented Bill Lee, Boat of the Year Judge.
“The standout feature on both the 373 and its new little sister, the 323, is a patented wheel that rotates 90 degrees; it is Beneteau’s answer to the industry-wide desire to open the passage straight through the cockpit from the transom, and it’s simpler than twin helm stations. Designed by naval architects Berret/Racoupeau, the 373 replaces the 361, of which hundreds have been built since its introduction in 1999,” said Murphy. The Beneteau 373 features the similar force disbursement components that
Beneteau uses in other boats in its line, which all are tied to a fiberglass grid bonded to the hull that distributes all the sailing loads.
“That grid system is superb”, said Ralph Naranjo, Technical Editor.  The Beneteau 373 will join the ranks of previous BOTY winners, an award series that has crowned the standout designs launched for the coming year for nearly two decades. The winners of the 2004 BOTY Awards will be featured in the January issue of Cruising World Magazine. 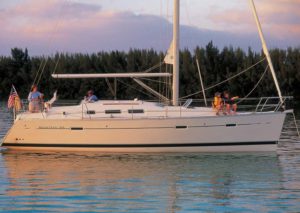