Most of us see the typical sailing yacht owner as a creature of the coast, spending time on the open ocean with dry land nothing more than a thin strip on the horizon. Jim McCann would beg to differ.
Jim resides in Franklin, Tennessee, not far from Nashville. For those not familiar with the area, it boasts several large lakes and reservoirs that are boating meccas. Jim has owned four yachts in his sailing life and is working on number five. All have been Beneteaus. All have been pre-owned. He has an eye for the classics and knows quality when he sees it.
Jim’s love affair with Beneteau goes something like this. His first boat was a Beneteau 310 he bought in 1994. “Jessica and I were spending time with friends in the Virgin Islands on a Beneteau 445 and really liked the boat a lot. Flying back into Nashville, I looked down at a marina and saw all the masts. I hadn’t been thinking of buying a boat until that trip, but about three weeks later, I was the proud owner of a Beneteau 310. I’ve been hooked ever since,” Jim said.
A few years later, Jim moved up to an Oceanis 370. His family loved her, but he felt she was a little big for the lake she called home. Plus he really longed to be back in the local racing scene. On a lark, he bought a Beneteau 210, mainly for her speed and maneuverability. Fast and nimble she was, but Jim soon realized he needed something a little larger. After much research and even more phone calls, his next boat would be a Beneteau 32s5 that he named Down Island. She was just right! That was 14 years ago, and it seemed Jim had found his dream boat.
When you’re as enthusiastic about classic Beneteaus as Jim is, it pays to have a reliable source for parts and good advice to give them the care they deserve. He found that source in Ward Richardson, head of customer service at the Beneteau plant in Marion, SC. Ward has been instrumental in helping Jim keep his boats in great shape.
So has Jim McCann finished his search to find the perfect Beneteau? Apparently not. He and his wife are currently negotiating for another Oceanis 370 which they plan to keep in the Florida Keys and dedicate more time together cruising her. This freshwater mariner is only beginning a new chapter in his log. Sail on, Jim. Sail on! 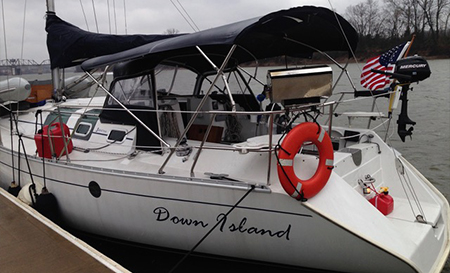 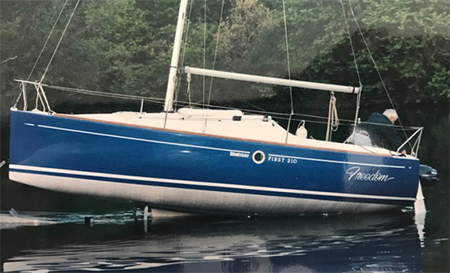