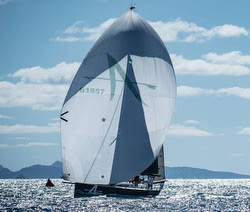 APOLLO Crushes Heineken St Maarten Long Distance Race
(Simpson Bay, St Maarten)- During the Heineken St Maarten Regatta, a newly launched J/121 named APOLLO created quite a stir amongst the offshore cognoscenti that were present in the 100-boat fleet.
The occasion was the traditional opening day race- the Round the Island Race.  Normally a 30.0nm picturesque circumnavigation of St Maarten, the course was changed for CHS Offshore classes due to lighter than normal winds in the 8-13 kts range from the East-Southeast.  The shortened course was approximately 23.6nm, starting in Simpson Bay heading west for 4.5nm under spinnaker to Point Basse Terre leaving it to starboard, a short reach north for 1.3nm around Point Plum, then a long 6.5nm beat up the Anguilla Channel to a turning mark off Bell Point leaving it to port, then a spinnaker run of 6.5nm back to Point Plum to port, around Pt Basse Terre for 1.3nm, then a 4.5nm beat to the infamous “Heineken Gate” and finish line in Simpson Bay.
It was a race course where no one could “hide”, you simply sailed it fast, clean, make smart sail choices, and have good boathandling.  Not much to pick for windshifts upwind or downwind, just sail fast and have fun.
That is precisely what Don Nicholson’s crew did aboard his J/121 APOLLO. They sailed away from their CHS 3 fleet that had the fastest, winningest J/122 in the Caribbean- EL OCASO- and the proven, winning offshore speedster- the J/111 SPIKE from the British Virgin Islands.  In other words, in a gold-plater division full of the best crews in the Caribbean, the J/121 sped away like a horse running for the roses and the barn door! 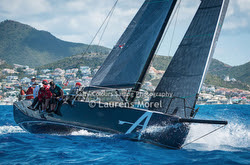 Leading at the first mark by well over 2 minutes, APOLLO powered away upwind to open up a substantial lead.  At the top turning mark, they gybe set their large A2 asymmetric spinnaker, and flew downwind.  By the time she crossed the finish line in 2 hrs 50 min 28 secs elapsed time (an 8.34 kts course average), they beat the 2nd place J/122 EL OCASO by 16 min 23 secs across the water and 9 min 11 secs on corrected time.  Needless to say, Nicholson and his crew were overjoyed to have proven in a simple point-to-point race that the J/121 lived up to its billing as an easy-to-sail, fast, shorthanded boat for six crew.
Nicholson commented on their performance with his new J/121 APOLLO after the regatta:
“I’m extremely pleased with our first regatta in APOLLO (J/121 hull #2).  We placed 3rd in CSA 3 Class of both the Gill Commodore’s Cup and the Heineken Regatta in diverse and challenging conditions against a fleet of extremely well-sailed boats.
Being scratch boat in the class and crossing the line first in most races was a thrill.  The J/121 handles extremely well, with dinghy-like responsiveness and quick acceleration.  She pointed higher to weather than I expected and we routinely found ourselves both higher and faster than the other boats in the fleet, giving us many tactical opportunities, especially in close quarters at the start.
Downwind she was delightfully fast and competently handled all the sail area we put up.
My crew was awesome and the J/121 provided them a great opportunity to experiment with trim, weight distribution and boat handling so that we got up the learning curve quickly.
Our next regatta will be the St Thomas International Regatta in the U.S. Virgin Islands and the adjacent British Virgin Islands Spring Regatta, where we hope to hone our skills and push the boat to its full potential.
After that, Apollo will return to her homeport of Newport, RI in preparation for the Newport-Bermuda race.  I’m a big fan of the J/121 already and it’s great to be able to reduce our crew numbers and simplify the logistics of the Apollo program.”  Sailing photo credits- Laurens Morel. For more J/121 Offshore Speedster sailing information

Murray Yacht Sales is your Gulf Coast Beneteau & J/Boats Dealer and has been serving the Gulf Coast Boating Community since 1974 with offices in Houston, New Orleans and St. Petersburg.